Hi folks, I'm back from my little summer vacation so you can expect activity on here to pick up again in the coming days.

Today I'm very pleased to announce the release of TIATracker, an open-source, cross-dev music editor for the Atari VCS/2600 console. Anyone who has ever tried making music for the VCS is probably aware of the problems surrounding that matter. Up to now, the only reasonable possibility was to hand-code music in assembly language, usually by using Paul Slocum's driver. There were several attempts at creating a TIA tracker, but they all eventually got stuck in early alpha.

Therefore, I can't stress enough what an outstanding achievement this tool constitutes. Written by Andre "Kylearan" Wichmann, TIAtracker runs on all major platforms that support the QT library.

Haven't gotten around to playing much with it yet, but I did manage to build it under Linux after a bit of head-scratching. Had to install the qjson libraries, then force makefile creation with "qmake -qt=qt5 TIATracker.pro". 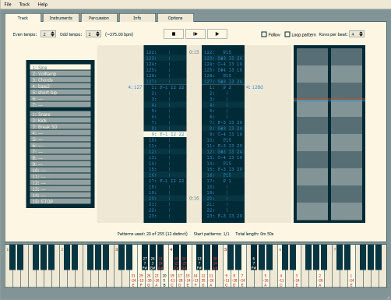 Downloads, source and documentation are available via the link above.
Posted by Unknown at 7:42 AM