Bet you didn't see that one coming, hehe...

Daily Dosis: Orbital Odyssey by Realm of Mind and ARE

PuzzleScript is a recent project by indie game developer Stephen “increpare” Lavelle. It's a flexible yet minimalistic, open-source, HTML5-based game engine which is most suited for designing puzzle games. An online editor is available at the project's homepage.

Why am I posting this here on Ancient Wonderworld? Well, because that's what the games will look like, for example:

In fact, all game graphics have to fit into a 5x5 pixel tile grid. Neat, huh? If you're still not convinced, then check out the latest PuzzleScript titles here, btw.
Posted by utz at 12:30 AM No comments:

Ok, one bonus for OST week:

So yeah everybody knows this one, but here we go anyway...


Here's something you don't get to see every day: a brand-new demo for the MSX. This one is called "Atsarias", made by Finnish group Lieves!Tuore. It took first place in the mixed 64K compo at Alternative Party last weekend.

The Youtube video seems a bit blurry, so I guess running the demo on emulator would be the better choice in absence of real hardware. Get the executable here.
Posted by utz at 10:03 AM No comments:


I actually wanted to put the Nautilus OST today, but I can't find a stream of it. So that will have to wait till I manage to set up a Tiny'r'SID player.
Posted by utz at 10:12 AM No comments: 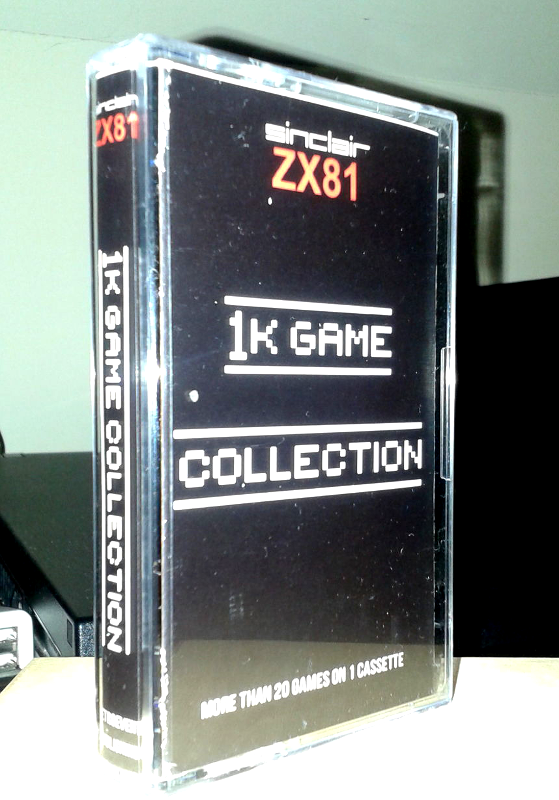 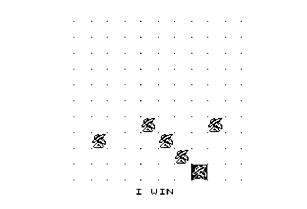 Dr. Beep's famous series of hi-res games for the unexpanded ZX81 has been released on tape.

Also, hi-res on ZX81? Say what? I thought that was only possible with a hardware mod? Well, a while ago it was revealed that ZX81 can actually do hi-res graphics - but only if it is running unexpanded. That means that any hi-res program for the ZX81 fit into 1K.

How far will that get you? Well, normally, not very far at all. But that doesn't stop Dr. Beep, of course. From action platformers to 3D maze games - nothing seems impossible for the Dutch machine code mastermind.


The package includes all 20 of his 1K hi-res games, plus a re-worked version of SOKOB-ONE. 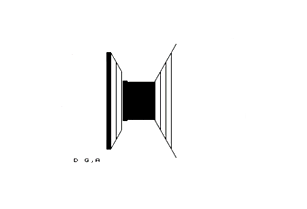 If you want to try out the games before buying, they're all available for free download at www.sinclairzxworld.com (which unfortunately is down today).

The tape, made by Revival Studios, costs 15 EUR. All profits will be donated to KWF, the Royal Dutch Cancer Foundation. Details on how to order can be found here.
Posted by utz at 6:29 AM No comments:


Umm yeah, it's Ancient Wonderworld's Videogame Music Week ;)
Posted by utz at 10:33 AM No comments:

All the various ZX graphic formats, including Gigascreen and Timex Multicolor as well as monochrome and low-res pictures, are accepted.

The theme will be announced at 13:00 GMT on ZX-Art, World of Spectrum, and TS-Labs. The entry period will be 3 hours. All registered users of ZX-Art will be eligible to vote.

The full announcement can be found here.
Posted by utz at 8:56 AM No comments:

Daily Dosis: Take It Off Already by Rico Zerone

So I'm back from the dead... nah, just a bit stressed out from Autumn Blips.
Alright then, here are some funky sounds for the weekend:

And now some Japanese culture for y'all:

Just a little reminder that there will be a massive chiptune party in Berlin this Friday, with Goto80, Pulselooper, and 7 more live acts. Details see here.

Two new non-English language publications on classic computing matters have been released in the past weeks.

First we have a issue #46 of the Austrian mag Lotek64. 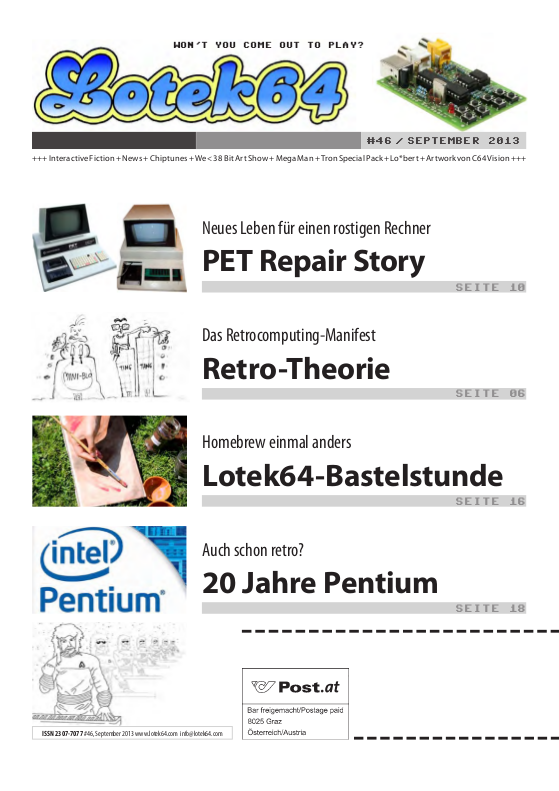 Founded in 2002, Lotek64 is one of the longest running fan-made magazines in the German-speaking 8-bit scene. It primarily focuses on 8-bit Commodore machines, although it does have a fair share of information on other platforms as well.

The current issue features, among other things, a translation of Carl Attrill's theoretical writings on "Retro Computing", a report on the restauration of a very rugged PET 2001, and a tribute to the 20th birthday of the Pentium, asking if 20 years means that the Pentium is now retro.

So, time to dust off the German dictionaries and fire up the translation tools of your choice. All issues of Lotek64 are available as free pdf download here, or you can subscribe to the printed issue for just the shipping costs. 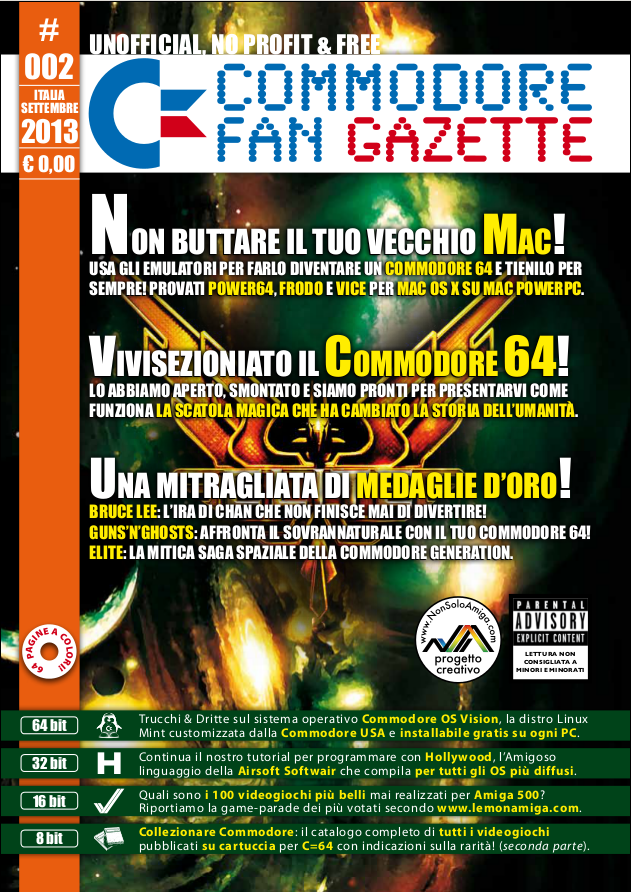 I don't speak Italian, yet from just flipping through it I'd say this looks very promising, both visually and content-wise. There are a whooping 64 pages with game reviews, a large programming section as well as hardware-related topics. The mag focuses on the whole range of Commodore computers.

Made some new FZX fonts for the ZX Spectrum, including the one pictured above. As usual, they're available on my zxgraph page.

By the way, if you are in need of some custom pixel fonts for a project of yours, send me a message or get in touch by leaving a comment below.
Posted by utz at 8:19 AM No comments:

You're gonna hate this one...

In the authors' own words, "[t]he program is not really useful, but I thought it might be some help for people who want to get into Game Boy programming."

Considering useful Gameboy sources are somewhat of a rarity in the wild, I'd say definately grab this one.

Download Instrumentor sources on Google Code.
Posted by utz at 6:09 AM No comments:

Want to know how text adventures for the ZX Spectrum were done back in the day? Watch this lovely in-depth tutorial series on GAC, the Graphic Adventure Creator.


I'll stop numbering the Daily Dosis, it really makes no sense.
Posted by utz at 11:02 AM No comments:

The new Stagediver EP came out today. The perfect autumn soundtrack for those who like things a notch darker, I'd say. Done in Octamed on Amiga 600. Available as 7" vinyl or digital download here.
Posted by utz at 10:59 AM No comments: 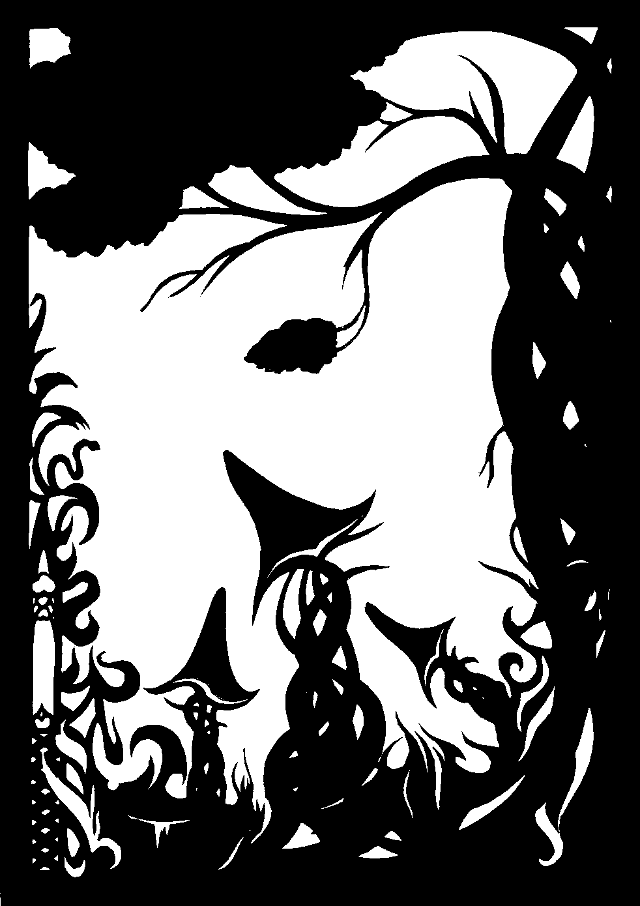 Not much going on in the lo-fi/lo-res world these days, so I guess it's the perfect time for releasing some more old art.

This one is called "Temple". It's done in papercutting. Made this back in 2004. Used it to decorate my living room's window for many years.
Posted by utz at 6:36 AM No comments:

Daily Dosis #7: System of a Dream by Starpilot


Wow, a lot of great stuff today. Here we have a neat little demo by 4mat, with awesome triple SID music by Jellica. Party version was released at Sundown this year. Not 100% convinced by the choice of colors in this one, but still a great prod. Anyway, download is here.
Posted by utz at 2:14 AM No comments: 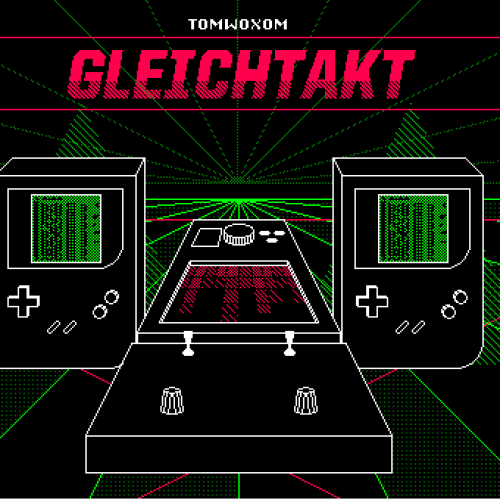 Tom Woxom's new album, titled "Gleichtakt" is finally out on Da! Heard It Records. It comes with 11 excellent, dancefloor compatible dual Gameboy tracks which will make you float through space. Check it out!
Posted by utz at 2:05 AM No comments: 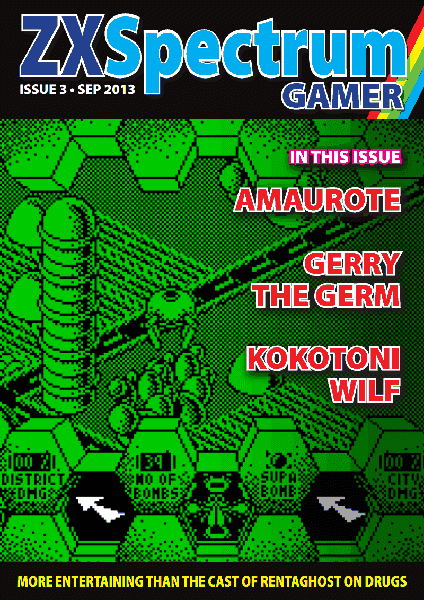 A new issue of what is arguably the funniest 8-bit themed magazine out there has just been released. ZX Spectrum Gamer isn't so much about reviewing games (or post-viewing, as the magazine puts it), as it is about cracking jokes at the expense of obscure titles from the Speccy library. As such, it holds a lot of appeal even for casual gamers like myself.

In this issue, author Paul of Sunteam takes a look at MAD's Amaurote, the notoriously crappy Gerry the Germ, and Kokotoni Wilf. No, I'm not making these title up, those game actually exists and can be found in the World of Spectrum archives, where you can also play them in your browser if you don't own a Speccy and/or are too lazy to install an emulator.

Well. First of all, a magazine that starts with a rant against insects must be good. Finally somebody is realizing that insects are in fact the arch nemesis of humankind and should be eliminated as soon as possible. Especially wood ticks. But I digress.

All in all, I found the slightly sarcastic humour present throughout the magazine to be absolutely gorgeous, even though some of the pop cultural references might be lost on non-Brits. Also, the whole thing is very well designed and a pleasure to read on-screen.

My only complaint is that it's merely 20 pages long, but considering the whole thing is the work of just one person, that argument is simply invalid. So, a solid 10 out of 10 potatoes for this hilarious production.

The magazine can be found here. In case you have problems with the online viewer, a download link is provided on Sunteam's homepage, where you'll also have access to the previous two issues of ZX Spectrum Gamer, as well as an extensive back catalogue of the sister publication PC Engine Gamer.
Posted by utz at 1:16 AM No comments:


Check out this excellent new low-res demo made by fragment of hedelmae. This is the follow-up to the Finnish group's LCD Megademo released exactly 10 years ago.

"Megademo" is perhaps a bit of an overstatement, considering the prod is less than 3½ minutes long. Other than that though it rocks. The music, made by Leaphion, is pretty slick, too. The demo runs on a 20x4 character LCD display hooked up to a PC. It took second place in the wild compo at this year's Assembly Summer party.
Posted by utz at 4:28 AM No comments: