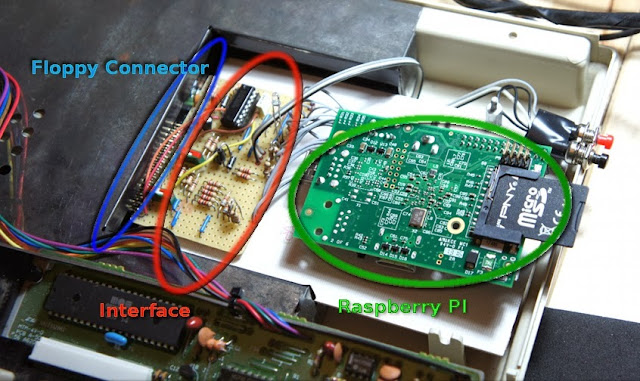 Italian Amiga enthousiast Maurizio Ramondo has developed this nice contraption, which basically turns your Raspberry Pi into an SD-card based replacement for the internal Amiga 500 floppy drive. Seems like a cheap and reasonably simple-to-build alternative for a mass storage solution indeed.


Just a demo video for now, but more info will be available here soon, I suppose.
Posted by utz at 4:18 PM 3 comments:


Some of you might have already noticed that I usually post hardstyle music at the start of the weekend. If you don't enjoy this kind of stuff, then don't klick the play button on Friday in the future :)
Posted by utz at 4:58 AM No comments:

It's been a while... gwEm has revised his 2xAtari ST SNDH player/DJ software STj, bringing it up to version 1.40. The update brings a few minor interface changes, as well as a couple of bugfixes. For a full changelog, see here.
Posted by utz at 2:09 AM No comments:

Thanks to Mister Beep for pointing out this wonderful Pokey softsynth track from the year 1988 to me.
Posted by utz at 8:29 AM 2 comments:

Computer Chess, a much hyped independent comedy/mocumentary revolving around a computer chess tournament in the 1980s, has been released for home audiences recently, after doing well at this year's Sundance Festival.


I have yet to see the full movie, so I won't comment on it in detail for the time being. However from the bits that I have seen so far, I'd say the humor is a bit too much in the "awkward/WTF" fashion that is so en vogue lately. And while critics almost universally praised the movie, audience response has been rather ambiguous so far.

Well, if AI and computer history are your thing, then I guess you'll be checking this out anyway. (I surely will, in case you're wondering.)

For everybody else, my recommendation is to wait a bit before buying the film. Instead, check out this subject related article on BBC News first.

If you have seen the movie already, please comment to share your thoughts on it.
Posted by utz at 9:12 AM No comments:

In 2005 a Chinese pirate company named ShenZhen Nanjing Technology released an unlicensed port of Final Fantasy VII for the NES. It was barely playable, and was universally panned by the gaming community.

However, over the past four years a ROM hacker named Lugia2009 laboriously revisited the code. Now we finally get to enjoy the fruits of his work - a completely reworked FF VII for the NES that is largely faithful to the original. Being a huge fan of the FF series myself, I'm quite happy to hear the news.

The hack comes in form of a patch, so you'll need the "original" ROM as well.

Below you'll find a WIP gameplay video from the end of last year, which should give you a rough idea of what to expect.


Ahh crap, too much Nintendo this week. Oh well, this is still a pirate game, so I guess that's ok ;)
Posted by utz at 10:00 AM No comments:

A bit of mindless fun once in a while can't hurt:


Head over to YoYo Games to download the game.
Posted by utz at 7:16 AM No comments:

Daily Dosis: Nothing Is Left (Chip Me Hard) by Nestroyer


Chipmusic. Being successfully dead since 2007.
Posted by utz at 4:39 AM No comments:

Daily Dosis: Dig Your Own Tomb by Eat Rabbit

info and download
Posted by utz at 8:50 AM No comments:

Daily Dosis: World Will Travel, Oh So Quickly by Ovenrake


So what happened to Superbutton? They kind of just disappeared silently. Think I'm gonna post some more SB tracks in the future, so as to honor the legacy of what was once one of the most well known chip netlabels.
Posted by utz at 4:52 AM No comments:

Here's a video of Danimal Cannon giving a talk on Chipmusic at TEDxBuffalo.
Well, if you're reading this blog, you probably know what Chipmusic is. But this presentation is so well done, I just had to share it. Besides, there's a nice live performance in it, too.

And now it's time for another jaw dropper from Sillyventure 2k13. This one goes out to all the ASCII art lovers. Third place in the Atari ST 96k compo, here is Unreversable by Masters of Electric City.


The Spectrum's inability to display more than two colors in a 8x8 pixel block has made it an easy target for ridicule, especially by disciples of a certain US-Amercian machine. Well, my dear friends of the big C=, those days are over. While you are still staring at your depressing grey-in-grey palette*, ZX Spectrum fans are now enjoying screens such as this one: 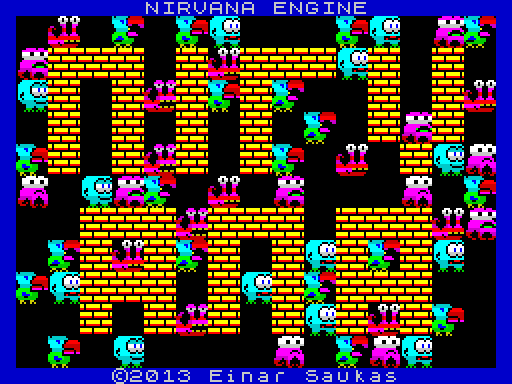 So-called "rainbow graphics" have been used on the Spectrum as early as 1985, with the game Hyper Sports being one of the earliest examples.
However, it would take another 24 years before Andrew Owen stepped in to really kickstart ZX multicolor development with his ColorPRINT-48 font driver.

With Andrew Owen's 2011 engine ZXodus and the release of BIFROST* by Einar Saukas a few months later, the use of multicolor tiles/sprites became easily accessible to ZX game developers.

Nirvana is the current cumulation point of the past 4 years of work in the field. The engine produces an multicolor tiled display across a whooping 30 columns and 22 rows. It's capable of changing color attributes every two scanlines, so effectively you get a near full-screen, 8x2 pixel display.

To make life easier for developers, Nirvana already integrates nicely with Boriel's ZX BASIC, and will support z88dk in the future.

Looking forward to the games that will be made with it. Until then, read more in the release thread on WOS.

* Dear C64 fans, don't take this too serious. I'm just cracking a few jokes at your expense, but really, I love the good ol' breadbox just as much, alright?
Posted by utz at 7:37 AM 2 comments:

Daily Dosis: Juha the Space Midget from Finland by Lithis

Oops, took a somewhat longer break with Daily Dosis, it seems. Well, it's back now :) 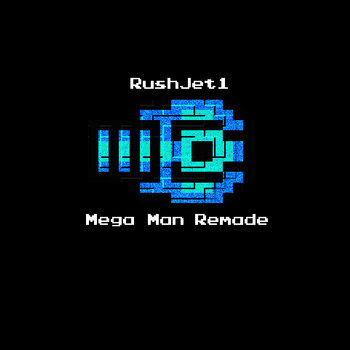 Rejoice, because RushJet1 brings us another complete Mega Man cover playthrough. This time, he takes on the original 1987 release in the series. Yes, that's the entire Mega Man 1 OST redone from scratch in stereo 2a03 glory.
Get it on Bandcamp, or watch the playthrough on Youtube.

Check it out here.

Ok, one more ST tune to make up for the previous lack of them. So here's my favorite Mad Max track. The recording quality is pretty crap, unfortunately - if anybody can find a better stream let me know. Go to 1:01 if the player doesn't jump automatically.

The first prods from Sillyventure 2013 are in. Seems there were some very strong Atari ST entries this year. Check out this 15 minute beast of an STf demo by Checkpoint and this short but rather stunning monochrome demo by Cerebral Vortex.

Relix by Paradox and DHS

Talking about YM. Paradox and DHS just released a massive ST music demo at Sillyventure. Over 3 hours of music, all made by 505. Get it here.

Wow, Daily Dosis has been running for more than a month, and nobody posted any YM tunes yet? Well, it's about time then, innit. 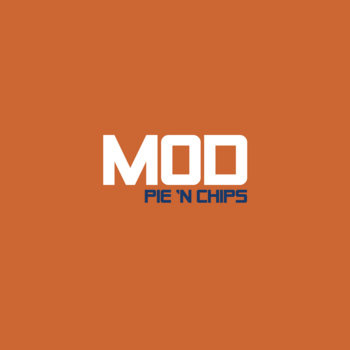 Taking a break from Daily Dosis today. Check out this new album by Amiga veteran m0d though. 18 pieces of cheesy AHX goodness, can't go wrong with that. 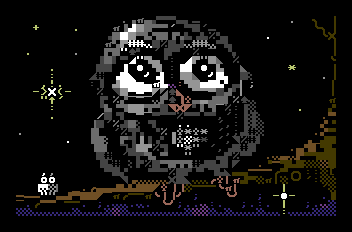 Voting has started for the Plain PETSCII Graphics Competition. There's a whooping 100+ entries to check out. Download the awesome votedisk, which contains all the entries in a single d64 file, and which you'll need to step through if you want to vote.

PS: And don't miss the recently unearthed, most awesome demotool from the year 1991: the 1x1 Pixel Editor! :P

Another one of my alltime favorites:

Game over, man, game over!

Cellulose - A Typewriter Demo by Tapir

Don't have much time to post anything today, so I'm just going to plug this crazy demo by the reclusive Finnish group Tapir.


It's rather ancient, but doesn't fail to impress even to this day. It was released at Dreamhack 2002, where it took first place in the oldskool compo. For more info, see the pouet entry.

So, does anybody remember these guys? 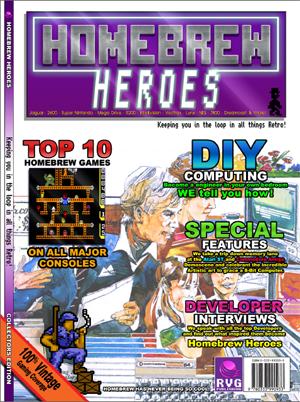 Homebrew Heroes is a brand new mag/book about, well, the homebrew scene, made by some folks from the retrovideogamer.co.uk team. Copying info from the producers:


Homebrew Heroes is more than just a magazine, it's over 100 pages of retro goodness dedicated to all things homebrew. Inside you will find the top 10 homebrew games for near enough every retro console out there from the Atari 2600 to the Sega Dreamcast as well as the history of each system, tech specs and screenshots. But that is not all, not even close, we also tell you how to build your own home computer and speak to somebody who has. Alongside this we bring you the history of DIY home computing through the ages. Want to read interviews with homebrew developers? We have those for you too!

Well, sounds like a good plan to me. The preview looks pretty rad, and for just 3,99 £, this seems like a pretty good deal in any case. 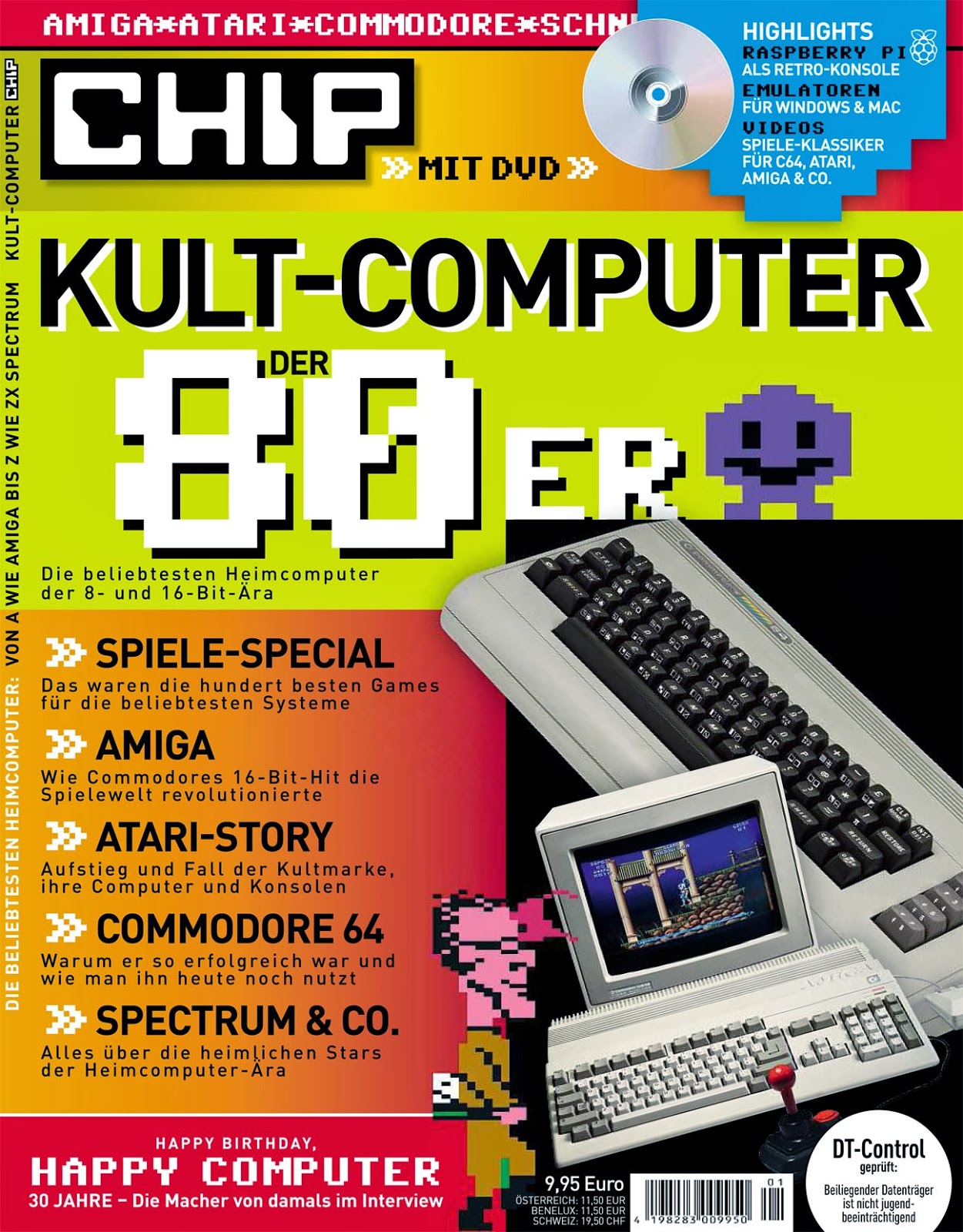 German computer mag CHIP surprises us with another special edition. This one is titled "Kult-Computer der 80er". Expect a whooping 148 pages of well-researched 8- and 16-bit computer history.

I haven't read this one yet, but going by previous experience, it will definately be worth the money. Printed copies are available for 9,95 EUR, or you can obtain a digital download code for 6,95 EUR.
Posted by utz at 8:50 AM No comments:

Email ThisBlogThis!Share to TwitterShare to FacebookShare to Pinterest
Labels: magazines 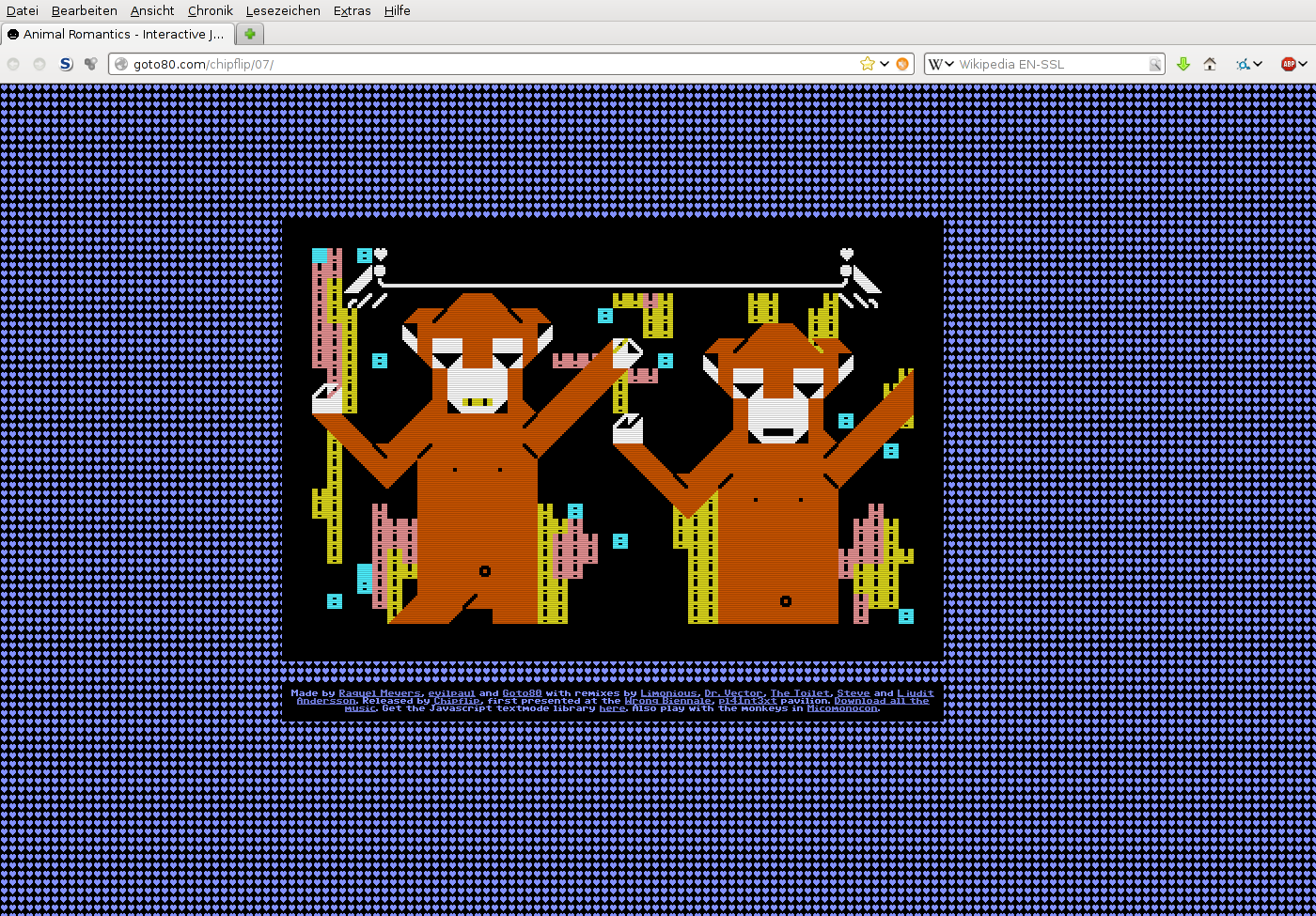 Check this out now on chipflip.org!!!
Posted by utz at 2:12 PM No comments:

Wowzerz, check out this great new EP by Doomcloud, which was released on 8bitpeoples a few days ago. Dark melodic slow NES House at it's best.

Now for some appropriate November music:

Prepare for a trip to a world full of mysteries:


This track comes from Ipower's awesome new album Abinox II, which was recently released on Pterodactyl Squad. I strongly suggest y'all head over there and download this if you haven't already. Or better, buy the cassette.
Posted by utz at 7:53 AM No comments:

I don't have a Vectrex so I'm just gonna sit in the corner and cry... or maybe I'll give this emulator a try ;)

Ok guys, if you have to do the Gameboy unce, at least do it right. Like for example: