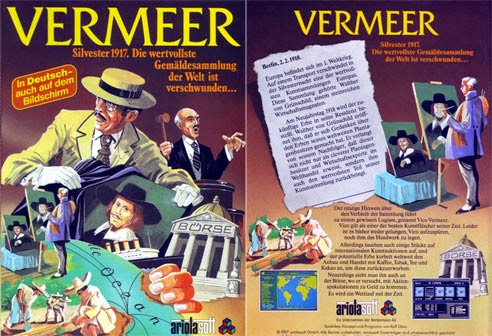 Goat of Laxity has translated Vermeer to English. What is this Vermeer, you may ask? While it may be virtually unknown to the English speaking world, in Germany it is known as one of the most popular C64 business simulation games ever made. Now, 27 years after it's release by Ariolasoft, non-German speakers can finally enjoy this awesome game, too.

The story goes as follows: We are writing the year 1917. One of the greatest collection of art has disappeared in the turmoil of war. The former owner, a wealthy man named Walther von Grünschild, promises to bequeath his global business empire onto the one who can bring back the collection.

Your task as a potential heir (players - up to 4 per game) is to buy back the valuable paintings from various auctions. To raise the money, you'll build your own empire, planting and trading coffee, tobacco, tea, and coacoa around the world.

Long story short, grab some friends (up to 4 players total) and check out this gem of a classic. Download here.
Posted by Unknown at 9:30 AM