FRODIGI - A New Way of Playing Samples on SID


Algorithm of Onslaught invented a new method of playing back sampled audio on the C64's SID chip. The strong points of this method are it's minimal rastertime usage and very good compression ratio.

FRODIGI (aka Free Running Oscillator DIGI) works on 8580 only. It is still work-in-progress, and does not yet perform well as a general purpose approach, as you can clearly hear in the demo ;) The results are impressive nontheless.

Anyway, check out the demo at csdb.
Posted by Unknown at 2:15 AM No comments:

Demoscene veteran Photon of Scoopex, who is doing the awesome ASMSKOOL coding tutorials on Youtube, has set up a new website dedicated entirely to Amiga coding. Check it out at coppershade.org (make sure to click the menu button on top of the site to get all the content).
Posted by Unknown at 8:50 AM 1 comment:

And thus ends the PC-98 special week here at Ancient Wonderworld. Perhaps I'll cover the PC-88, the PC-98's little brother, some time in the future.
Posted by utz at 4:37 AM No comments:

Daily Dosis: Necronomicon OST - The Deep One by MUSE


Composed by the other MUSE, obviously.
Posted by utz at 5:30 AM No comments:

You didn't seriously think I'd do this PC-98 special without posting at least one beeper OST, did you? Well, here we go, then...


Gawd, that cover art. What were they thinking. And it doesn't stop there. This game... it's basically Castlevania with tits. Whaddyknow. The music kicks ass though. Or should I say, whips ass...

And yes, I know this is fairly common stuff for Japanese titles, especially PC-98 games, except usually the characters are made to look even more underage. Doesn't make things any better.
Posted by utz at 5:30 AM No comments:

Damn, this shit is weird!

The submission period for the Spring Tracks III music compo at battleofthebits.org has (surprisingly) ended on schedule, which means the voting now commences. Pick your favorite fakechip, not-so-fake chip, Mariopants extended, and battleart works out of a total of 150 submissions!
Posted by utz at 2:41 PM No comments:

Yes, that's right, the little Piggy (a popular LSDJ-style tracker for various newer portable consoles and more, in case you didn't know), is now open source. Get a-hacking at https://github.com/Mdashdotdashn/LittleGPTracker.
Posted by utz at 10:57 AM No comments:

Here's something I've been wanting to do for a while: A PC-98 special for Daily Dosis.


While virtually unknown in the western world, the 8086 based PC-98 by NEC was one of the most successful personal computers of all time in Japan. Manufactured between 1982 and 1999, it sold more than 18 million times.

In terms of sound, the PC-98 is most commonly associated with Yamaha's OPN (YM2203) FM soundchip, though it also came equipped with a PC speaker, and later models yielded an OPNA (YM2608) instead (used by the above game for example).

If you want to dig more into PC-98 music, check out the Hoot Archive.
Posted by utz at 4:53 AM No comments:

Yaaah, we didn't have any proper PC speaker music in while, did we? Time to change that...


Btw there's a new Daily Dosis special launching tomorrow, so stay tuned!
Posted by utz at 6:08 AM No comments:

An important message to all retro fans who also like hi-tech gadgets: Tablets contain magnets.

German IT news site Golem.de has published a report (in German) of a user destroying the hard drive in his notebook by putting an Nvidia Tegra Note 7 on it. The magnets in the device are supposedly strong enough to hold the 335 gram device suspended from above.

According to Golem.de, the Tegra has especially strong magnets, but other tablets exhibit the problem as well. Biotronik, an implant producer, has also warned that people with an artificial cardiac pacemaker should make sure to keep at distance from tablets.

So, the message is clear: Keep your tablets away from floppies, tapes, and other devices sensible to magnetism.

A new issue of the Commodore themed PDF magazine Reset has been published. Get it here.
Posted by utz at 5:06 PM No comments:


New album by Realm of Mind is out! Drop everything right now and head over to Bandcamp to get your dosis of hyperactive Chiptunedeathelectrometal!
Posted by utz at 3:55 PM No comments:

Daily Dosis: Death Rides Upon A Pale Horse Through The Mountains Of The North by 9999HP 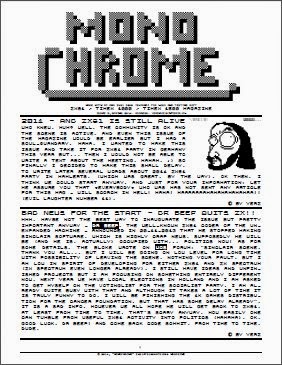 Issue #5 of Monochrome, the one and only magazine for ZX81 and compatibles, has just been released in PDF format. It includes great game and hardware reviews, a party report from this year's ZX81 Meeting in Mahlerts, and more cool stuff.

Daily Dosis: Do Not Fall by Kiryoo


Turn up the volume, 'cause this Impulse Tracker tune may be the best thing you'll hear in a while.
Posted by utz at 5:30 AM No comments:


HellMood strikes again, this time with an 8 byte "Matrix" type effect for MS-DOS. The Youtube capture sucks, so make sure you download this and try it out in DOSBox or on a real oldschool PC.

And once you get bored with it, have fun with this 16 byte Paint program by the same author ;)
Posted by utz at 7:32 AM 2 comments:

Daily Dosis: There Are No Waffles in Hell by DoctorGentleman

A fundraiser is currently underway for an exiting new C64 MIDI interface. At a target price of 50 EUR, this thing will be well worth your money.

Developed by German C64 coder and hardware expert Frank Buß, the cartridge will feature not only full MIDI in, out, and thru support, but also a possibility to directly transfer PRG files from PC via USB. It comes with SIDWizard and Steinberg Pro 16 pre-installed. The design and firmware will be open source, so you can build this beast yourself as well, if you're feeling lucky.

Even if you're not interested, you gotta love the guy's thick Colognian accent ;)

Read up on the details on the fundraiser site and preorder the cartridge or donate a few bucks to the project!
Posted by utz at 4:48 AM No comments:


Another outstanding 256 byte ZX Spectrum demo from Multimatograf. This one took first place. Now waiting for the Obama version ;)

Download the demo here.
Posted by utz at 12:47 PM No comments:

Yesterday was the 50st anniversary of our beloved BASIC programming language, so Happy belated Birthday from Ancient Wonderworld.

People have written about the occasion in detail elsewhere already, so I'm not going to bother with a full length article.


Just a fun fact that I haven't seen mentioned elsewhere: Did you know that BASIC wasn't always called BASIC? When John Kemeny and Thomas Kurtz started to work on the language in 1963, they orginally called it Dartmouth Oversimplified Programming Experiment, or short DOPE. I wonder what they were smoking...
Posted by utz at 5:48 AM No comments:

Debris (zx), the masters of tiny demos, have released a new ZX Spectrum prod at Multimatograf. It took a well deserved 2nd place in the 256 byte compo.

Download here.
Posted by utz at 5:26 AM No comments:

More info and a download link can be found here.
Posted by utz at 5:00 AM No comments: